The HMO International HerMa Conference on Heritage Management will be hosted in the Paleo Eleourgio, the infrastructure of the old olive-oil and soap-making plant at Elefsina. The industrial complex embodies the significant commercial floruit achieved in the 19th century, at both local and national level.

The soap factory Charilaou was founded in 1875 by the brothers Lysander and Emmanuel Charilaos, who came from Galati in Romania to Elefsina, prompted by the production there already of household soap. As their source of energy they used steam power, exploiting as raw materials olive kernels, enriched with a few other substances. The product was transported easily by ships as far as the ports of Patras, Syros and Piraeus. The annual production reached a total of 600,000 tonnes; of which 175,000 were exported to various Mediterranean countries. As a result of such a large-scale, for those times, level of production, the Σάπων Ελευσίνος (Soap of Eleusis) rivalled French products.

In 1892, Epaminondas Charilaos, a chemist who had studied in France and Germany, went into cooperation with Nikolaos Kanellopoulos, also a chemist: they bought the soap factory. It was thereafter known as the E. Charilaos-N. Kanellopoulos factory. The plant, which at the beginning of its operation had 20 workers, in 1900 had grown to employ 90 (10 of which were women) and by 1928 had mushroomed to more than 250! However, all production ceased in the 1960s.

The inactive area of Paleo Eleourgio hosts now cultural events and in the facilities in general here is a plan to create permanent cultural spaces, parks and a parking station.

The Paul and Alexandra Canellopoulos Foundation has undertaken to sponsor the publication of an album to accompany the exhibition Transformations of the Elefsina Landscape – Town and Antiquities, to be held at the Leonidas Canellopoulos Cultural Centre in Elefsina from 5 July to 28 August.

The exhibition is being organized by the archaeologist Kalliopi Papangeli and the architect Eleni-Anna Efthymiou-Hlepa.

Ever year an exhibition is staged at the Cultural Centre in memory of Leonidas Canellopoulos, Chairman of TITAN SA for a number of years, in association with the Elefsina Council and TITAN Cement SA.

The Elefsina Cultural Centre was opened in 2005 and has staged numerous exhibitions, installations, lectures etc. It also organizes cultural seminars during the annual Aeschyleia festival.

Elefsina is the Athenian suburb that stands out for its special cultural identity. Inhabited for more than 4000 years, Elefsina was one of the most important religious centres that established the rituals of Eleusinian Mysteries around the 6th century BC. In the recent years Elefsina maintained its importance and flourished as an exemplar and pioneer industrial centre that gathered workers from the wider Greek area, as well as the refugees from the Minor Asia. This cultural amalgam forms nowadays a unique landscape of oppositions and unifications. 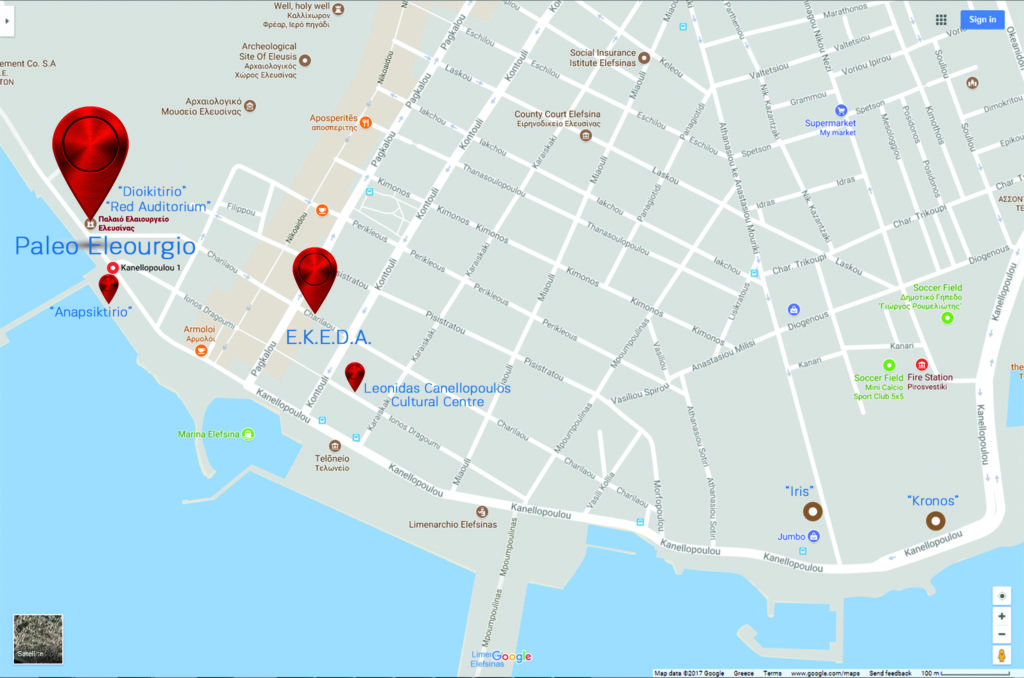