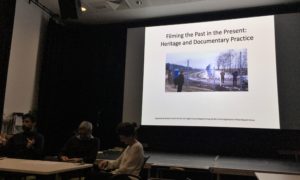 As I sit down to write a few words about my experience in producing and filming a documentary on landscape archaeology in the island of Naxos, I wonder what could be of interest to us, the heritage tribe…

I am a producer/director with an MA in Heritage Management, working for Greece’s national broadcaster ERT, as well for the Heritage Management Organization.
I specialize in documentaries on heritage, anthropology and on children’s programs.

This documentary came about by sheer chance, actually.
My first intention was to gather information for another heritage production, this one for children. But the latter was at an initial stage of conception and the team consisted of just me and the artistic director.

First point to note:
If you are a heritage manager from the production field, you will be needing a solid research/scientific team to work with; mostly because this is the way to guarantee authenticity and support, scientific and financial. Without those, the road is long and it
won’t necessarily come to fruition, even if it is well researched by the production team and vice versa.

The next step was to bring the McCord center’s scientific team for the research in Naxos, together with the production and management team from Greece’s National Broadcaster (ERT), and form – more than a coproduction- a synergy.

Second point to note:
Funding for heritage documentaries can be difficult these days. Hence, forming some sort of a co-production or synergy is essential in order to get the better of two worlds.

An agreement was established and the pre-production begun, including the values to be communicated, the narrative, the artistic style, days of filming, crew, cost etc. The scientific and the production team worked closely together, to make sure we were both aiming towards the same direction.

Third point to note:
Once the production team is formed and the concept of the narrative is designed, one needs to start thinking of:

This point will guarantee that when the crew is on location for the filming, the human and financial resources available for the production will be used up to the optimum potential in accordance with the desired goals.

Fourth point to note:
Once on location, the production team – apart from filming- is also doing another very important work; namely engaging with the local society. We need to always keep in mind that television production is a popular medium. So these productions, on location and upon distribution, approach the local society, stakeholders and the target audience, in a completely different way. This connection creates another type of bond with the people and should be part of the production design, one of its main goals.

All points completed, and a year later, the documentary was aired twice by Greece’s national broadcaster ERT. The first time was scheduled and the second occurred as a result of the audience’s demand!

On May the 15th a workshop took place at the University of Newcastle, with the title:

“Filming the Past in the Present:  Heritage and Documentary Practice”

It was a collaborative event supported by the   Digital Cultures Research Group and the Research Centre for Film, the Cultural Significance of Place Research Group.

There were three films presented by the research teams and the producers. One of them was Hidden Landscapes of Naxos.

All the films were completely different in artistic style and narrative. However, the main points were evident in all of them.

To conclude, the reason for this blog piece – after reading through my writings a few times – is probably to serve as a brief manual on what it takes to actually pull through an audiovisual production on heritage.