Creeps in this petty pace from day to day,

To the last syllable of recorded time;

And all our yesterdays have lighted fools.

The way to dusty death

Basse Santa Su is a quiet town, more than 300km upriver from the coast in The Gambia. I was there in May 2019 to build partnerships for HERITΛGE – we were looking to develop a project to provide training for Gambian heritage managers, as the European Commission had put out a call for proposals.

I was fascinated by this advert for in bus tickets by the road in the town centre. 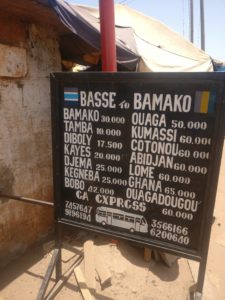 A bus to Ouagadougou! In Burkina Faso! Wow, how long would that take!?

My Gambian colleague told me it would take three or four days. He was glad I had spotted this, because that bus journey is the start of the ‘back way’.

The Gambia is a poor country. Tourism, and ground nut (peanut) production are the two biggest sectors of the economy. Historically, remittances from Gambians working in other countries have also supported a lot of families in the homeland, and for a long time the preferred work was in the oil industry, specifically in Libya. But the revolution in Libya in 2011 put an end to much of that.

The Ebola crisis in West Africa in 2014, which carried on until 2016, badly affected tourism – there were no Ebola cases in The Gambia, but knowing that it was in Guinea, Liberia and Sierra Leone was enough to frighten away a lot of tourists. And so the economy suffered.

And so the lack of jobs and opportunities has meant that over recent years, many Gambians have decided to risk trying to go the back way to Europe – what is euphemistically called ‘irregular’ migration across the Sahara and the Mediterranean.

The back way is horribly formalised. People travel up-country to Basse, and buy a bus ticket to Ouagadougou. When they get there, a ‘travel agent’ will sell them another ‘ticket’ to go to Libya. And when – if – they arrive at the coast, they will then have to pay for a place on a boat.

It has been estimated that up to one third of the people who try to go the back way die en route, either in the desert or in the sea. Some villages have lost as much as half of their population to the back way.

In 2017, Gambian GDP per person was $483.02 = 23,885 Dalasi. That one ticket costs more than two years wages. And that only gets to Burkina Faso. The longer, riskier, more expensive legs of the back way start there. People, and their families, are being crushed by debt to pay for this – with little chance of them reaching a ‘promised land’ at the end of it.

In 2017, The Gambia underwent a transition to true democratic rule. The Government of The Gambia, together with the European Union, wanted to make efforts to reduce irregular migration. And this is the logic behind the project I was in The Gambia to develop a partnership for.

If people are better trained as heritage managers, then heritage businesses (whether they are in the private or state sectors) will be better run. Better run enterprises can employ more people, and give them more secure, better jobs. People with better jobs are less likely to be lost to the back way. And so investment in heritage management training can contribute to a reduction in irregular migration.

The Gambia has a history of losing people. Alex Haley’s 1976 book Roots: the saga of an American family starts in The Gambia – the protagonist, Kunta Kinte, is a young Gambian man who is enslaved by Europeans in the middle of the 18th century, and like Kunta Kinte, thousands of people were transported down the River Gambia and sold in the Atlantic slave trade. 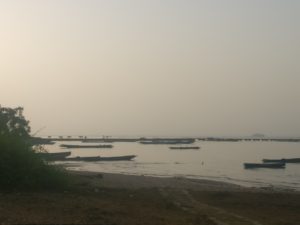 James Island, the site of a colonial fort used in the exploitation of gold, ivory and humanity, was renamed Kunta Kinte Island in 2011, the year before the site was inscribed on the list of World Heritage Sites. Where there is heritage-focussed tourism in The Gambia, this is largely related to the history of enslavement. It is hoped that now, developing skills and expertise in managing and commemorating the loss of Gambians to the slave trade, will help to mitigate against the loss of modern Gambians to the back way.